Narcissism is epidemic and there is scarcely a domain that is immune. A Clear and Present Danger: Narcissism in the Era of Donald Trump brings together bestselling authors, university professors, and practicing clinicians. “Every country has the government it deserves”, said Alexis de Toqueville, author of Democracy in America. Whatever history eventually records about the 2016 presidential election, this frank and thoughtful exploration of narcissism will prove to be a timely and timeless study.

A Clear and Present Danger: Narcissism in the Era of President Trump

President Trump’s victory in 2016 stunned the world and unleased a new era in U.S. politics.  Donald Trump often embodies the opposite of what many expect from a president, making it difficult for even Republican leaders to know how to respond to him. From his stubborn refusal to release his tax returns to the unprecedented cordiality he displayed to Vladimir Putin despite compelling evidence of Russia’s tampering with the 2016 election, President Trump has proven to be a shadowy figure who many, including Richard Reich, feared would consolidate power like a demagogue. His brazen, overly self-confident manner is a lightning rod for those who think anything that changes the old order is welcomed and is a warning of a clear and present danger for those who oppose him. Since taking office President Trump’s personality and its potential impact upon world affairs has become a central focus for many.

Narcissism is epidemic and as Dr. Tom Singer points out, President Trump is “carrying around the longest selfie stick in the world.”

A Clear and Present Danger: Narcissism in the Era of President Trump assembles thoughtful, deep explorations of narcissism by bestselling authors, university professors, and practicing clinicians.  The narcissist often demands that the world conform to their image in order to sustain unending adulation and praise. They are capable of viscous and cold-hearted retaliation when their image is impugned. Narcissism demands to be mirrored and refuses to be challenged. Readers may recognize narcissistic features in people they know from work, the home, the entertainment industry, and politics. President Trump’s supporters as well as his detractors may be left asking how narcissistic traits manifest in someone who becomes President of the United States of America.

“Every country has the government it deserves,” said Alexis de Tocqueville, author of Democracy in America. The contributors share a hope that these essays will become a mirror for the reader and for a nation called to examine itself. In the end, as Dr. Clarissa Pinkola Estés reminds us, “We were made for times like these.”

Be sure to get your hands on The Dangerous Case of  Donald Trump by Brandy Lee, M.D., M.Div. 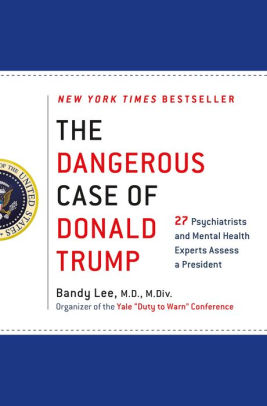 The consensus view of two dozen psychiatrists and psychologists that Trump is dangerously mentally ill and that he presents a clear and present danger to the nation and our own mental health. Read more about author Bandy Lee, M.D., M.Div. here.